It isn’t just sexual partners that have an end to it – our friendships do too!

A lot of relationships come to an end for whatever reason, they just have to or they run a natural course because sometimes relationships are suited for just that moment in time. This doesn’t mean there’s anything wrong with you or with them (unless either of you did something hurtful – we can all be full on assholes, it happens) it’s just in life there’s an expiry date.

I’ve had to accept tonnes of friendships that run a natural course but I’ve now just put it as ‘was nice knowing you, wish you the best, bye felicia.’

Online I see people from Primary school, Secondary School and College but I have no long lasting friendships – in fact I’ve only got about three friendships that have lasted longer than 4 years that have lasted the test of times with circumstances, with me having children or them focusing on partners and careers which is natural!

I’m probably not the easiest person to be friends with as I have anxiety and depression which can make it awkward in the sense I don’t go out all the time to socialise as mental health can be a selfish bastard, it makes me flakey. I acknowledge this though. I’m a good friend in the sense I will support your dreams, I will listen and offer advice and I will accept your opinions (even if they are shit) but hey I admit my faults and failures – my biggest critic is myself!

Things I’ve learnt – if you want a friendship that lasts a long time, you should get comfortable asking for what you need as being direct about a situation can help. It can feel awkward, but if you get in the habit of stating your needs, you can avoid a pileup of resentments much later on!

Letting go of a friendship doesn’t mean you don’t value that friendship or your time together it just means you have to focus on what feels right.

If you value  a friendship you can make it work but sometimes friendships are only there for the time you need them and then you move on… That’s life. 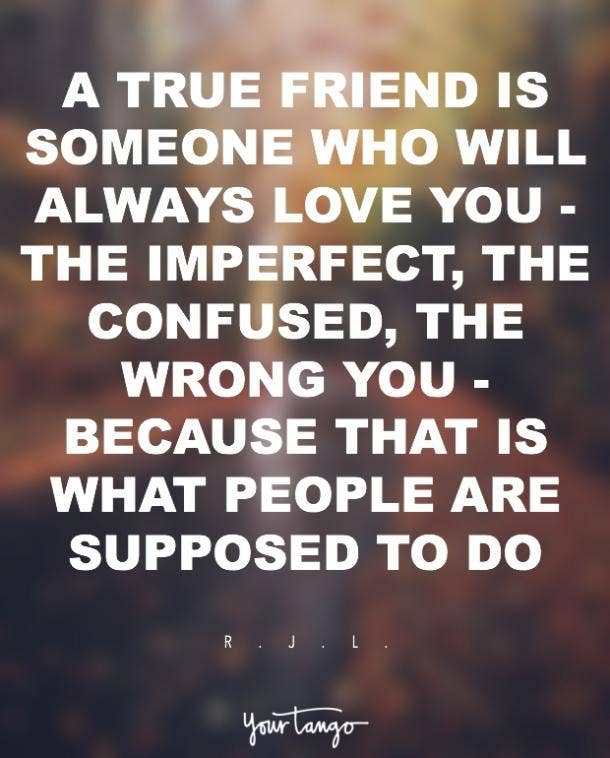 “Friendship is born at that moment when one person says to another, ‘What! You too? I thought I was the only one.”
– C.S. Lewis

“True friendship comes when the silence between two people is comfortable.”
– David Tyson

“Sweet is the memory of distant friends! Like the mellow rays of the departing sun, it falls tenderly, yet sadly, on the heart.”
– Washington Irving

“There’s not a word yet for old friends who’ve just met.”
– Jim Henson

“A single rose can be my garden… a single friend, my world.”
– Leo Buscaglia

16 SIGNS A FRIENDSHIP IS OVER

1.They aren’t present during important milestones in your life – these milestones can make it difficult (sometimes) for the other person to understand as their situation is the same. Or it could be that you’ve changed with this milestone.

From personal experience I’ve found my milestone moments have ended the friendships because they are unable to deal with the change of circumstances in my life – whether it be having a baby, to being dumped etc as I change or react to them which makes the other person disagree with how I handle a situation or just generally we become different people.

2. You constantly have awkward conversation – forced small talk? Unable to even make conversation? Yep, been there. Not the end of the world just means that you’re both different people and you will always hold dear memories but that’s that.

3. Relocation – can be a massive difference as sometimes out of site out of mind. Alas, that’s not saying you can’t speak online or keep up to date but a big move can change circumstances with work as well as making new friendships.

4. You disagree lifestyle choices – which is fair enough as you get older, you take on more responsibility. You start to pay off your loans, buy house insurance, pay for rent, start building a career and maybe start a family. With increasing responsibilities, you have to make lifestyle changes.

You can no longer hang out with your friends who are always going out partying til 6 am! If you find the habits of your friends not suitable for you then this is one of the signs a friendship is over.

There’s also the fact they may not support your lifestyle decision, whether it be career move or more children.

5. You have separate friends and group of people – if you spend time in different circles you will find your time shortened. There’s also the fact your friends may not like each other and it’s difficult to handle their disagreements that aren’t to do with you.

This could be as a result of your lives not as interesting as they used to. You will usually notice that your mutual friends are reducing and you two barely know each other’s new friends.

6. You no longer see each other – which can be due to work, family, moving countries, separate friends etc but not sharing new memories together and big changes ultimately changes the dynamics of a friendship.

7. Conversations are based on the past – not always bad to be nostalgic but if the effortless conversations you used to have are gone and have turned into awkward and tedious then the only thing you seem to have in common is the past… Which means you sound like you’re both moving on.

8. You only catch up via social media – social media can end friendships in the sense no one can be bothered to see one another. ‘Social’ media can be anything but social.

9. Disagreements/arguments – everyone has disagreements but sometimes they end the friendship.

Everyone makes mistakes it’s normal but if a person can’t own up to what they’ve done wrong then I’m afraid it’s the end as there’s always resentment. Communication is key, you need to express any hurt and hope to repair it.

Sometimes, however, the damage is done. Are you often arguing with your friend over small things? If you argue more than you connect, then there is a problem. One of you could be hurt or feeling wronged. You could choose to work it out or kill the friendship.

Trust is important and if you can’t trust a person it’s bye-bye.

10. You are the only one putting in effort – it takes two.
If you are the only one who is constantly reaching out and making plans, then your friendship is as good as dead. Good friends will make an effort to reach out or make plans every now and then.

There are exceptions to this though like ill health (physically and mentally) living away, family, work etc.

We can’t be expected to talk everyday of course and always remember the other person is going through something you aren’t.

11. You no longer enjoy their company – like any partner you’ve had, well, sometimes quite frankly everything they do is annoying, you disagree with them, they want you to change etc.

Being a friend isn’t about being the same it’s about valuing differences, sharing experiences and like with any relationship that does just fizzle out.

12. You recieve formal invitations to their events – this happens to me a lot these days and it really highlights that we’ve all moved on.

13. When something big happens you don’t contact them – to me this says a lot as to not be the first person they want to tell can be sad, they don’t want to message you their news first.

14. You no longer have anything in common – we change. Life changes. You go through a lot of changes in your childhood to teens’s to your 20’s – a true friend is them giving you the freedom to be yourself, to change and to grow!

Like I said above you might move to a new city, pursue a career or interest, or get married. Such events change you a lot. You are not the same person you were! We are always changing and evolving but you might find that you can no longer relate to the friends you used to hang out with in school.

15. They don’t support you – it’s unfair for you to give them all the love and support and receive nothing in return. It can be exhausting. If you are always bigging them up, maybe sharing things online and they would rather see you fail than succeed, that isn’t friendship.

A true friend wants to see you happy, successful, to compliment you when you are low but when they don’t you deserve better and you deserve more.

16. They cut you out – for whatever reason they feel they need to move on and that’s ok.

3 thoughts on “16 reasons why your friendship is over – Bye Pal.”